The TSI Rap by Jen Hunt 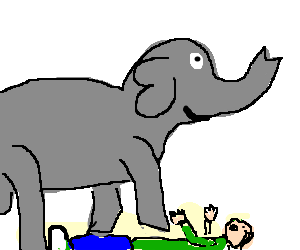 Tonight I am adding a rapping twist
Please strap your seat belts, hold the frowns--
Now presenting…Jen’s Assessment Low-Down!
Say you’ve got a client who’s freakin’ out
With lots of fears to iron out
He’s feeling numb, irate and troubled
And the height he jumps when scared has doubled
Maybe he returned from a tour in Iraq
And hasn’t been normal since he came back
You think “What to do! Could it be??
This dude right here has P-T-S-D??”
Well, don’t you spaz or get your Hanes in a dither
You’ve been around the block from there to hither,
So cut your Web-browsing, breathe deep, go over
And git out your handy dandy Psycho-M folder,
Simply pull the sheet ‘bout two thirds through
Under “P” for Posttraumatic Stress Disorder Tests and You.
Cause to figure out if it the diagnostic shoe fits
You might have to call on your CN728 wits.
Now PTSD isn’t so rare
Many sufferers exist out there
Guys or gals, be they black, tan, or white


Are struggling with this invisible plight
Some, though no Bear Grylls, have lived Man vs. Wild--
Others, like, Harry Potter, were harmed as a child--
Some are stuck reenacting the Life of Pi
Repeating, “It’s just this tiger on a raft-- and I!”
It could be from rape, it could be from battery,
It could be from war, quakes, accidents--it don’t matter-y,
Around ten percent of us, before we die
Will eat from this traumatic-pie.
Thank God there’s a measure of this madness
A test quite good (though it may lack rad-ness)
Published in the state of gators and Disney
A John Briere tool called the Trauma Symptom Invent’ry
With a hundred-plus Q’s, 20 minutes from start to finish
This self-administered ditty won’t strain the skittish
Likert-type scaled (from “never” to “often”),
It covers the six months right up ‘til you saw ‘em
Standardized for folks from 18 to high eighties
Hey, you can use this one ‘til your clients push daisies!
Validity’s fine, with age and gender grading,
Its T-score design provides ample clinical scales for rating.
Let’s see….
There’s a scale for irritation, impaired self-reference, irksome thinking,
Anxious arousal, depression, severe somatic inklings,
Two scales for sex concerns and one for insecure attachment,
A scale for if they want to rip their head and smash it
(Alternatively, for those who might blush,
There’s a version that simply skips the sex-stuff).
Basically, the TSI assesses amount and types of distress-
Your client has encountered (whether recent or long-repressed).
The test correlates well with other trauma gauges,
Just be careful when using it for minority races.
Its reliability mean is fine at .86,
But in terms of adding info others don’t, it’s mixed.
It requires a “level B,” but takes just 20 minutes to score,
‘Course there’s always grading software, if you hate the chore.
The first TSI came out in ’95
But in 2011 the whole thing was revised.
Why with sleeker scales, validity and wider norm samples
Orders might soon pour right up to ol’ Briere’s ankles!
I guess I should have called this rap the “TSI-2”
Though it’s too late now to change it, ‘cause I’m almost through.
But wait! All this can be yours for a low, low $350
Which includes an unlimited use CD-ROM—can you say nifty?
In conclusion, my dear Psychometric lasses-- and lad,
I will stop before this sounds like some “Seen On TV” ad.
Just please know, if one day you should find these facts relevant
I hope it’s not because you were trampled by an elephant.