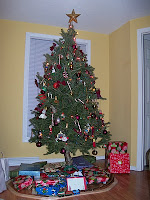 The first time I bought a tree, spouseless
I found it morbid
There were so many casualties
None ideal
The kids and I inspected each victim like bodies in a morgue
Air so cold my eyeballs stung in the twilight--
And after we had argued about, passed over
Rejected and otherwise not chosen a truck load
This one remained
The pine the Lord had put in the center of the parking lot
Overpriced, stale and lonely
Albeit lusty-green, coifed and now: ours--
I stood dispassionate as the attendant
Laid it on the table, subjecting barely-released limbs
To straight jacket once more--
Sent the children indoors--
While we bungeed the spoil to the roof
Like a tourniquet for the dying--
Sent them inside
To a room smelling of cider
Though cider was nowhere to be found,
Just Styrofoam, powdered chocolate
And a cashier’s scolding over spilt water—
All the way home
To thwart the certain garage-tree collision
I sang a dirge with cocoa-scalded tongue
Substituting “Remember to Park in the Driveway”
For “The Farmer in the Dell”--
Then banished our lifeless cargo to the corner
For the night--
To see it huddled there
Undressed, misshapen
I winced--
How curved the trunk was
Beneath those shaved branches
Quite a flawed specimen
Twice-bent really
Hopeless
A tree no mother-in-law could love--
Expectations axed at every level
Error on display
I braced for execution--
Tossed peeved and fitfully all night
Mind full of an oversight
Surpassing my late father-in-law’s own curved-trunk gaffe
Who could be forgiven because he was British, well-off
And, ultimately, bright--
How the tree managed to stay upright
In the stand the next morning
Without wire or walls
Lord only knows—
Hung, methinks, by a mercy
Outwitting
Both sin,
And stupidity
Posted by GoodPressGirl at 8:00 AM